An inclusive city is a city in which the processes of development consider a variety of citizens and activities. These cities maintain their wealth and creative power by avoiding marginalization.

According to the United Nations, more than half of the world’s population will live in cities by 2050. Approximately 6.5 billion people will live in urban areas.

As more of the world’s population becomes urban, countries must strive to transform the way they build and manage urban spaces to achieve sustainable development.

Making cities sustainable and inclusive ensures safe and affordable housing as well as opportunities for all. To achieve such resilience, countries must begin to improve urban planning and management.

Ghana has for many years grappled with flooding, the growth of slums, inadequate affordable housing in urban areas, unsustainable public transport, poor city sanitation and more.

One of the major ways in which Ghana has attempted to achieve inclusive and sustainable cities is through affordable housing projects.

Most middle income families have to opt for expensive rented spaces within the city or live very far from the city in more affordable areas. The problem of yearly advanced rent also continues to defeat the idea of affordability.

Architects at the Delf Global Initiative say, the most certain strategy to achieving the development goal 11 is for Ghana to institute collaboration between housing developers and government.

A multi-sectoral approach is necessary especially for new towns as they have increasingly become too expensive for the ordinary Ghanaian.

Presenting their research findings at the 5th Anniversary of the Delf Global Initiative in the Netherlands dubbed impact day, they explain that cities like Accra already suffer from the effects of a lack of collaborative city planning through congestion, poor sanitation and slum growth.

Professor of Housing Institutions & Governance at Delf University, Marja Elsinga who also supervises many Urban Housing PhD students in Ghana, argues that for Ghana’s new towns to be inclusive, there must be deliberate effort between government and profit making developers.

Affordability, she says, cannot be attained quickly and in isolation. Affordability needs to cut across design, material use, legislation and shared benefits. In the absence of which, programs for affordable housing soon become unaffordable to the target groups.

The minimum requirements, she says, can only be set by government.

She believes there is an urgent need for government, urban planners, architects, financial planners and affected experts to collaborate to ensure that new developments meant for target groups fall within the needs and budgets of the people.

Urban housing researcher Rachel Keeton, whose research covers new towns around Accra, explains that the challenge of affordability prevents these new towns from being inclusive.

She cites newtowns like Prampram and Appolonia as examples of developing new towns which can still benefit from a multi-sectoral approach to urban planning.

She further suggests that although Tema qualifies as a new town, it is too far developed to introduce major structural changes.

She proposes instead for the Tema Development Corporation (TDC) to regulate the many informal settlements and rearrange infill structures scattered around the city to align better with the old planned grid. She also advises the lack of a clear definition for affordable housing in Ghana. A situation, she says, limits regulation and gives developers too much leverage.

Keeton encouraged government to develop a framework for affordable housing and to ensure that builders are meeting the requirements of the framework to create a blueprint for regulation.

‘’There are options, what is strange about Ghana is that there is no acceptable definition for affordable housing. Many developers use the term to get approval from government but there is no clear quantitative definition. So if Government makes a clear definition, then there can be deliberate regulation. In the absence of a definition, developers do whatever they want’’

The Delft Global Initiative is a yearly event that brings together stakeholders across sectors to collaborate for solutions to the world’s development challenges. 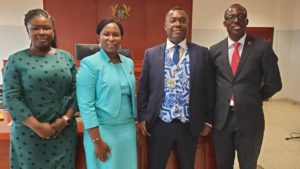