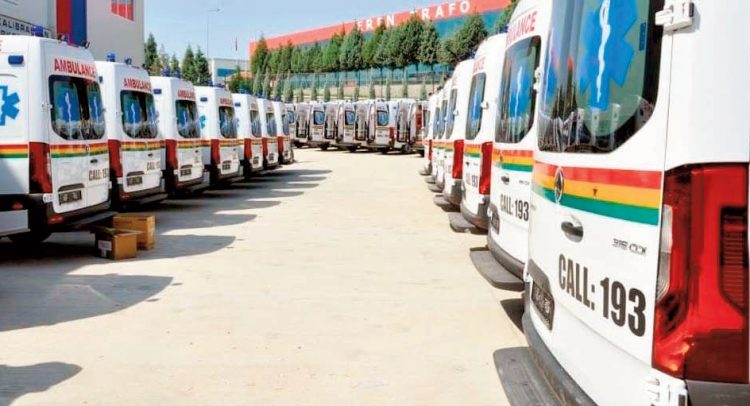 Minister of Health, Kwaku Agyeman-Manu, has asked Ghanaians to exercise patience in the distribution of the 307 ambulances procured by government under its $1m per constituency policy.

Already, government has taken delivery of 98 of the 307 ambulances which Finance Minister, Ken Ofori-Atta, while presenting the 2020 Budget Statement and Economic Policy in Parliament on Wednesday indicated would be distributed to the various districts nationwide.

But Mr. Agyeman-Manu in an interview with DGN Online on the sidelines of the inauguration of the “ORBIS Flying Eye Hospital” in Accra, disclosed that the distribution of the ambulances will start when the full complement have been received.

“Ghanaians should exercise a little patience. We are still receiving them in batches so we may have to hesitate a little in the distribution but in case of any emergency, we will be able to deploy to save the situation.”

Although the sector minister did not give the timelines to when the expected ambulances will arrive in the country, he said, “We expect to have the full complement soon, have the President commission, them then we can start distribution.”

Currently, Ghana can boast of only 55 ambulances, most of which are in poor conditions.

The National Ambulance Service (NAS) in a recent media interview pleaded with government to distribute the ambulances that had arrived in the country to augment the present fleet.

“We do not know when we will take delivery of them. We understand they are coming in batches so I do not know when it will be handed over to us, but if government says because of the inadequate ambulances we have now, they will give them to us as they come in, we will be happy to work with them.”

“As at now, we have 55 weak ambulances nationwide which are over stressed and some in poor conditions and have to be serviced time and again, which means that at a point in time less than the number we have can perform emergency services,” the Public Relations Officer of NAS, Simmons Yussif Kewura stated.