Mr Williams Amuzu Agbodzalo, Senior Panel Member, Zakadza Shrine, popularly known as Nogokpo Shrine has said COVID-19 would clear off the shores of Ghana and Africa after rituals on April 19.

He said the shrine delayed to perform rituals for Torgbui Zakadza (god of thunder) scheduled for March 21 in compliance with the directive on suspension of mass gathering in the country to fight the virus spread and predicted that, “after the rituals are performed next month, this COVID-19 will leave Ghana and Africa.”

Mr Agbodzalo said this during a meeting of chiefs, traditional priests and priestesses with the Municipal Chief Executive (MCE) at the Ketu South Municipal Assembly.

The meeting was called to inform the traditional leaders of the COVID-19 pandemic, the situation so far in Ghana and the world, efforts of government in containing the virus spread and the role every Ghanaian must play.

The Regent of Torgbui Saba, Dufia of Nogokpo said it was a great risk to suspend the March 21 date for observing the annual ritual of ceremonies for the shrine and noted that as patriotic citizens, the rituals would be limited to few people so as not to flout the President’s directives on public gathering, “for these ceremonies attract hundreds of people across the country and beyond.”

He said the mystical powers of Torgbui Zakadza would be invoked during the rituals to cleanse the land.

Torgbui Nyatakpo Saba II, Domefiaga of Klikor Traditional Area said as traditional rulers, they had a role to ensure people lived in good health, adding, the Traditional Area had consulted the gods and would perform “dodede” (removal of disease) rite for the pandemic to go.

There were separate meetings held for Christian groups and Islamic leaders aimed at getting all the religious bodies and relevant stakeholders involved in the fight against the pandemic.

Mr Abdullateef Abdulsalam, Imam at Ablorgo Mosque, Aflao who spoke on behalf of Ketu South Chief Imam said he was grateful for the meeting and pledged the support of the Muslim faithful in observing the directives aimed at containing the spread of the virus.

Covid-19 spread must not go beyond April- Duncan Williams

COVID-19 Businesses Support Fund should spur MSMEs on to thrive 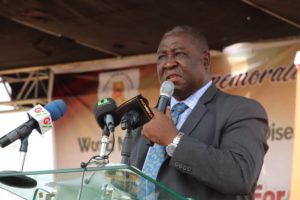 Rain or shine, 2020 elections will come off - Kweku Baako

‘Music Industry Will Struggle To Recover After Covid-19’