The Police have arrested three persons for  questioning on possible conspiracy charge for their role in the alleged kidnapping of Josephine Panyin Mensah, a resident of Takoradi.

The Police said investigations suggested that Ms Mensah, who is being handled as a suspect now, may have conspired with other persons over her possible planned disappearance.

The family of Ms Mensah announced that she was in an advanced stage of pregnancy when she was kidnapped, while going for a walk in her neighbourhood on the dawn of Thursday, September 16.

However, following the reappearance of Josephine at Axim on Tuesday September 21, the Police in a statement, on Thursday, said the medical report on her indicated that she was not pregnant as reported.

The statement signed by Assistant Commissioner of Police (ACP) Kwesi Ofori, the Acting Director-General of Public Affairs, and copied to the Ghana News Agency, said medical reports indicated that Ms Mensah was never pregnant within the period under review, based on examination by doctors at the Axim Government Hospital.

It said during interrogation, Ms Mensah mentioned the European (Takoradi) Hospital, in Takoradi, as where she did reviews and assessment.

However, medical records at the facility suggested that she visited the Hospital without a pregnancy in October, last year.

It said on Tuesday, September 21, 2021, at about 0930 hours when Ms Mensah reappeared, she was immediately sent to the Axim Government Hospital for medical attention.

Meanwhile, adequate measures were in place to ensure that Ms Mensah was safe even as investigations continued, it said.

Following her disappearance more than 40 police officers were assigned to track her whereabouts on a 24-hour basis with regular updates to the family, the statement said.

“More worrying is the fact that for a number of years the Regional Command has recorded several false kidnapping cases where people conspired to create ‘self kidnapping’ incidents to make money out of ransoms,” the statement said.

A team, with support from the National Headquarters, had, consequently, been put together to quell the emerging crime in the Western Region.

The statement gave the assurance that Police would continue to revise security strategies to protect the people of the Region and the rest of the country. 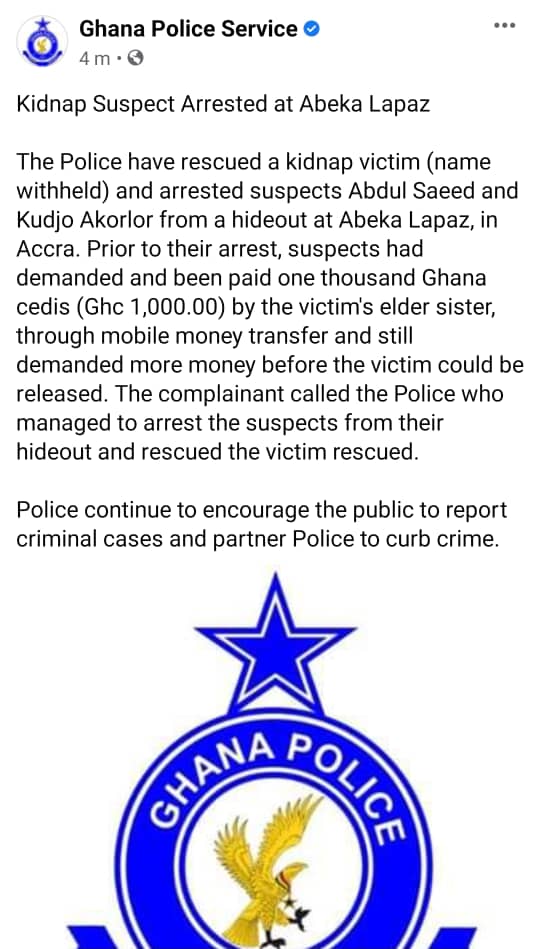