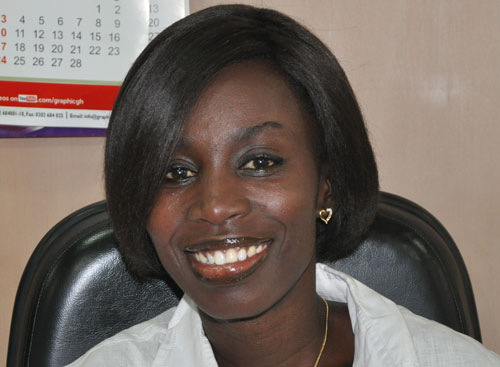 Veteran Sports Journalist, Rosalind Koramah Amoh, has given a breakdown of what she intends to do if elected onto the new Ghana Football Association Executive Council.

She's part of four women vying for the only slot for a woman representative on the Council.

The former vice-chairperson of the National Women's League has been a strong advocate for the development of women's football since the late '90s.

In 1999, she was part of the first women congress in California which looked at the establishment of the  FIFA U17 Women's tournament.

“Well I think that for a very long time I have been an advocate for women football,  perhaps because of what I did as a journalist and my passion for women in sports I became an advocate, so if there’s an opportunity for anybody to represent women at the executive to restructure the executive committee, I have the experience and I think I still can be a good advocate and that is why I am putting myself up, to be a voice for women’s football and also to help push  for a lot of changes, development and progress for women’s football”.

The Sports Writers Association of Ghana treasurer is confident her voice on the Executive Council will grant her more opportunities to continue the change she has been seeking for in the development of women's football.

“I have experience in writing and managing women’s football, I may not have been a club owner but I have dealt with all the clubs and players consistently so I know what it takes, I know the challenges, I have always been part of them, again I believe that we need people who can also articulate the issues and help find solutions to those issues and I have worked in that capacity and I qualify to that”.

“In the last eight years a lot of the changes that we have made or the steady progress that we have made in women’s football, I have been part of that story and I think that my being there will only afford me a better opportunity to build upon all those foundations we have laid. So that together we can even make better progress in the development and progression of women’s football.”

She, however, concedes that the lack of women taking part in football administration is as a result of the huge dominance by the men but optimistic about setting the pace for more people to take up the mantle.

“Well we should understand where we’ve come from, it’s been 25 years, but then women’s football has solely, even when you look at the structures of women football now, we still have men who control a lot of the women clubs and it’s because we haven’t developed that administrative acumen.

“In the last ten year, however, a lot of women are coming up even as coaches and all that, and I believe we will get there one day, we didn’t start with this from day one and so we don’t expect that all of a sudden it will change, gradually we are making significant changes and I believe that with that historic representation on the new FA, it will serve as further encouragement for many more people to get on board, so we are hoping that we will be able to inspire and mentor others to take up the mantle.”

Rosalind Amoh is up against   Edna Quagrine, Evelyn NsiahAsare, and Habiba Atta Forson for the only female slot on the Executive Council.