€47 judgement debt: Ghanaians have been betrayed by their gov’ts – Amidu

€47 judgement debt: Ghanaians have been betrayed by their gov’ts – Amidu

Ghana Web
Special Prosecutor, Martin Amidu, has said he feels let down that the state has been unable to retrieve a €47 million judgement debt paid illegally to Waterville Holding, money the Supreme Court has ruled must be retrieved.

“I feel very bad. And I feel not personally betrayed. I feel Ghanaians have been betrayed by their own governments,” he said in a recent episode of the talk show, Time with David.

Mr Amidu early this month dragged the Attorney-General to the Supreme Court on grounds that the department failed to carry out an order to retrieve the €47 million judgement debt.

In the suit, which was also filed against Waterville Holding, a construction firm and Alfred Woyome, a businessman, Martin Amidu holds that it has been more than a year since the case, “Martin Amidu vs Attorney General & Waterville Holding (BVI) Limited By Martin A. B. K. Amidu” was determined by an Arbitration Tribunal but the order has not been carried out.

The recent case is yet to be determined by the Supreme Court, however, speaking on the matter on the current affairs talk show, he said was disappointed that the current Attorney-General, Gloria Akuffo, even failed to tell the Ghanaian public that the International Court of Arbitration has ruled in favour of Ghana on the matter.

“The reason why I fell out with [late President Prof Evans Atta Mills] was that on the 13th of January 2012 I insisted that we retrieve those monies – from both Woyome and Waterville. We disagreed, I decided that I was leaving…But I had assured Prof Mills that when I leave, I was going to ensure that that Waterville and Woyome case goes to the Supreme Court so that a decision will be made that I was right.

The Supreme Court in June 2013 ruled in favour of Martin Amidu in a judgment debt case brought against Alfred Woyome, Waterville Holdings and Isofoton.

The court described as illegal, monies paid to the entities and the individual, and ordered that Government retrieved the monies from them.

“I am returning to court in my personal capacity as the only person with enough vested interest in the conclusion of the case after having procured the decision, orders and directions of the Court contained in the judgment dated 14th June 2013,” Mr Amidu explained why he has decided to drag the Attorney-General and others to the Supreme Court.

Mr Amidu said on Time with David that despite heading the Office of the Special Prosecutor, with a mandate to prosecute to corruption, bribery, or other criminal cases at the national level whether, in both the public or private sector, there is a rife bi-partisan attempt to stifle his work.

According to him, both the governments of the New Patriotic Party (NPP) and the National Democratic Congress (NDC) were complicit in the illegal payment of judgements Mr Woyome, Waterville and Isofoton.

Asked by host of the programme, David Ampofo, if he is worried that he may be fired for speaking out fiercely against the government, he said was not.

He said at 68 years, he did not care if he was fired for doing the right thing.

Watch more in the video below:

I’ve been vindicated by decision to quarantine returnees – Akufo-Addo

Security personnel have not brutalised any Ghanaian – Police

COVID-19: Ghanaians allegedly facing eviction from their homes in China

The Republic vrs Eugene Baffoe-Bonnie and 4 others: Full judgement delivered by Court of Appeal 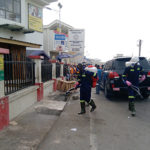