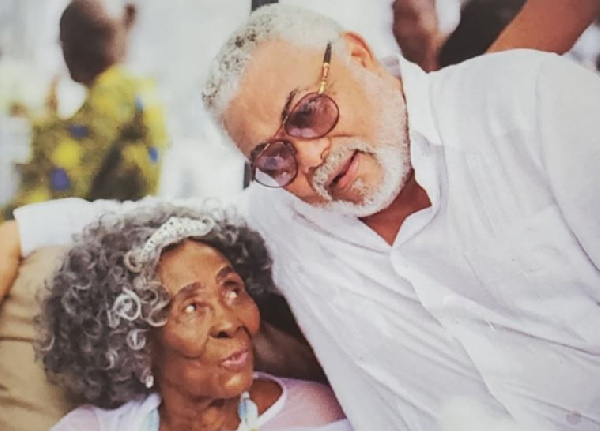 According to him, his late mother was tough and determined and never stopped threatening the use of the rod. She was fearless and had the most amazing work ethic.

The former president in a glowing tribute during his mother’s funeral rites at the forecourt of the State House, Accra, indicated that his late mother whilst alive “believed that the devil found use for the idle hand, so kept herself and those around her busy at all times”.

The late Victoria Agbotui engaged in the fishing and baking business for many years until her retirement.

He recounted how his love for nature always led him to the Achimota Forest even on Saturdays, and when his mother visited him at Achimota School, she met his absence because he was enjoying the tranquillity of nature.

“[One day]...as I headed back through the arboretum, I could see her standing in front of Guggisberg House wagging her finger at some poor student who was unfamiliar with her temperament. Invariably she was leaving a warning of some sort behind for me.”

Rawlings noted that his late mother never wanted him to join the military and felt pained and vindicated about her initial reservations regarding her son's career choice during his trial after the May 15, 1979 coup.

He reminisced about how the fearless nature of his late mother led to her rebuking the late Otumfuo Osei Tutu Agyeman-Prempeh at the State House where she worked as a baker.

“When I went to visit her at the State House, I heard her yelling at someone. I followed her voice round the building till I arrived on the scene to witness my mother standing in the garden, rebuking someone on the balcony at the top of her voice.

“I looked up, and it was none other than Otumfuo Osei Tutu Agyeman-Prempeh II, the then Asantehene (of blessed memory) who had asked for salt from a junior staff member contrary to his strict dietary requirements. Naturally, he turned away and went into his room when he saw the shocked expression on my face," Jerry John Rawlings recounted.

“Auntie Vic was talking to this great King as if he was her son! She was fearless with little regard for political correctness.”

“My mother never spoke; she only shouted. I can still hear her voice as I reminisce. That’s probably why I can’t seem to speak in a quiet voice, either, of all the things to inherit," Rawlings stressed.

“Even on her 100th birthday, she was still giving orders about who was to stand where and what she wanted to eat and drink. She never lost her fire!”

He further stated that at times, he feared that his late mother would outlive some of her children and her peers.

“She was as tough as nails, but the good Lord giveth and taketh and I know she is already in Heaven busily shouting out instructions. I have no doubt God will make her police chief in Heaven to dish out her brand of discipline and trust her to perform the role with distinction,” he said.