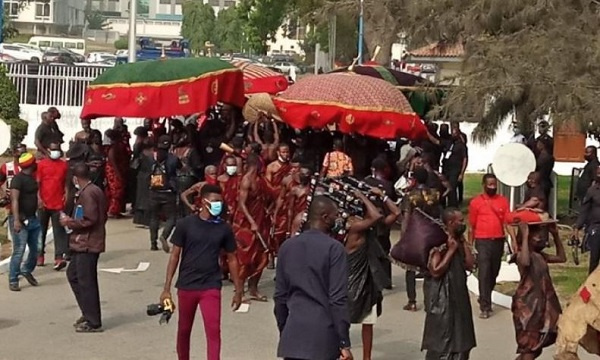 He did this through a delegation from the palace to represent him.

Led by the Omanhene of Kumawu Traditional Area and clad in black, together with the entourage in his royal palanquin, he was escorted into the auditorium with dancing and drumming.

Amidst a unique display of culture, the King, represented by his spokespersons presented items including kente cloths, monies and customary drinks to the family in honour of the departed statesman.

The Omanhene of the Kumawu Traditional Area, Barima Safo Tweneboah Kodua who represented the Asante King, Otumfuo Osei Tutu II, whilst comforting the family in his speech recounted fond memories of the former President Rawlings, his unique relationship with the King and the support and love they showed for each other on several occasions.

He expressed his condolence with the family and pledged his unflinching support for them during the period. He also advocated for peace during this period, considering it is one of the values the former President stood for.

Speaking on behalf of the family, Dr. Zanetor Rawlings who received the items thanked the King and the entire Royal family for their show of support and love during their difficult times.