Over 4,000 farmers to benefit from PFJ in Bongo District

Over 4,000 farmers to benefit from PFJ in Bongo District

A TOTAL of 4,321 farmers in the Bongo District of the Upper East Region have been registered to benefit from fertilizers and assorted high-yielding seeds under the government’s flagship policy, ‘Planting for Food and Jobs (PFJ)’.

The PFJ policy, which was a major campaign message of the then opposition leader, Nana Addo Dankwa Akufo-Addo of New Patriotic Party (NPP), during the electioneering campaign ahead of the 2016 general elections, was aimed at boosting agriculture and making it more attractive to ensure food availability and job creation.

Delivering his presentation during a town hall meeting in Bongo, the District Chief Executive, Mr Peter Ayamga Ayinbisa disclosed that out of the total of 4,321registered farmers -3,319 were males and 1,002 were females. He added that about 1,527 farmers have received their share of the fertilizers and seeds.

The consignment also comprised of assorted high-yielding seeds, including 200 bags of maize, 21 bags of soya beans, 205 bags of rice, 150 sachets of pepper and 140 sachets of tomato.

He was quick to add that: “Please note that, this was done without any political considerations. Also as management, we are not rushing the programme because we want to ensure that only persons who are genuine farmers really benefit from this laudable intervention.”

Mr Ayinbisa, however, lamented over what he described as saboteurs of state who have begun diverting some of the consignments of fertilizers meant for the programme.

“The vigilance and eagle eyes our security agencies here successfully led to the arrest of a truck-load of fertilizer around Namoo area.

“It is, however, regrettable to note that, the court has asked the truck and its content to be redirected to where it was meant for,” he stated.

Mr. Ayinbasa disclosed that as at August 8, 2017, the district agriculture directorate had sprayed 568 hectares of some affected farms which were infected by the fall army warms. This he said the government provided the chemicals.

While charging all government appointees to in the region to periodically give accounts of their stewardship, Mr. Rockson Ayine Bukari, Upper East regional minister, also urged the citizenry to honor their tax obligations which would go a long way to assist in the execution of government policies and programmes.

In the Upper East Region, Bongo district was the first to hold its town hall meeting since the assumption of the Nana Addo-led NPP administration. The remaining 12 municipal/district assemblies were also expected to do same.

From William Nlanjerbor JALULAH, Bongo. dav  A TOTAL of 4,321 farmers in the Bongo District of the Upper East Region have been registered to benefit from fertilizers and assorted high-yielding seeds under the government’s flagship policy, ‘Planting for Food and Jobs (PFJ)’. The PFJ policy, which was a major campaign message of the then […] Read Full Story
Advertise Here contact ads[@]ghheadlines.com
Related Items general news News Other News
general news 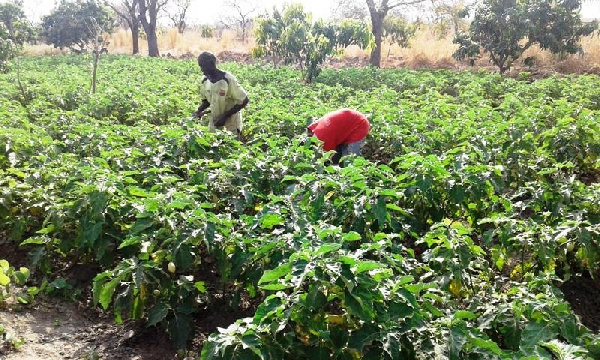 About 398 farmers in Kwahu South benefit from PFJ programme

A total of 2,769 farmers benefit from PFJ in South Dayi

200,000 farmers in UWR expected ﻿to benefit from PFJs this year

Over 2,000 farmers benefit under Planting for Food and Jobs

Over 2,000 highly marginalised girls to benefit from “STAGE” project