Miss Abigail Annoh and Geoffrey Buta were adjudged the Best News Reporter and Best Photo Journalist respectively at the ceremony which climaxed the GJA’s platinum anniversary.

The Ghanaian Times also received a special award for its contribution to the country and the GJA within the past years.

The highlight of the ceremony was the crowning of Doreen Hammond of the Junior Graphic as Best Journalist for the Year 2018 in addition to her award as the Best Columnist.

In all, journalists of the Graphic Communications Group Limited won 12 awards while those from the Ghana News Agency (GNA) also took home six awards.

Four journalists of Joy News won five awards including Most Promising Journalist while GHOne TV was named Best Television Station in the English Language category with two of its journalists grabbing three awards.

Peace FM and UTV, both of the Despite Group emerged Best Radio Station and Best Television Station in the Akan category.

The ceremony was graced by the  Vice President,  Alhaji Dr Mahamudu Bawumia;  Senior Minister, Yaw Osafo-Marfo; Members of Parliament (MPs), leaders of political parties, board members and management of state organisations, among other high profile personalities.

The event saw the presentation of special awards to some individuals and organisations including former President John Agyekum Kufuor and Gifty Afenyi Dadzie for championing media freedom and their contribution to the expansion of Ghana’s media landscape.

Delivering her acceptance speech, Ms Doreen Hammond expressed gratitude to her family and senior colleagues, who over the years have supported her to build her professional career.

She further dedicated the award to individuals who championed media freedom in the country even at the expense of their lives and called on current journalists to continue to uphold the ethics and standards of the profession.

“We cannot fail those heroes who sacrificed to ensure that today we have media freedom and large landscape. Let us be a voice for the voiceless and contribute our quota towards propelling Ghana’s development,” she stated.

President of GJA, Affail Monney, touted the media’s contribution to the attainment of the country’s independence and strengthening democracy through the dissemination of divergent views and provision of feedback over the years.

Despite the positives, he said media independence was under attack due to media owners dictating content and direction as well as commercial operations and called on the media fraternity to work together to find ways of addressing them to ensure total freedom and independence of the media in Ghana. 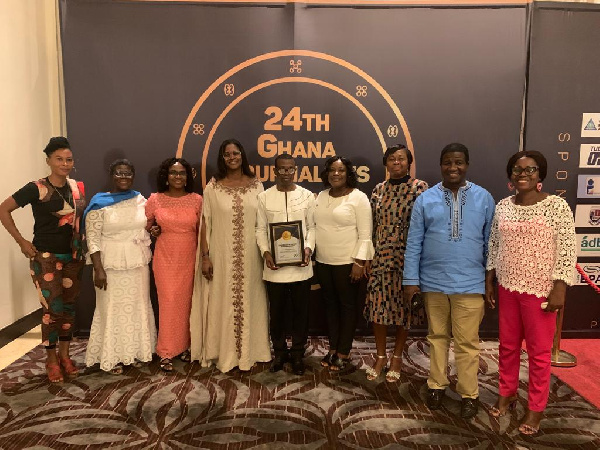