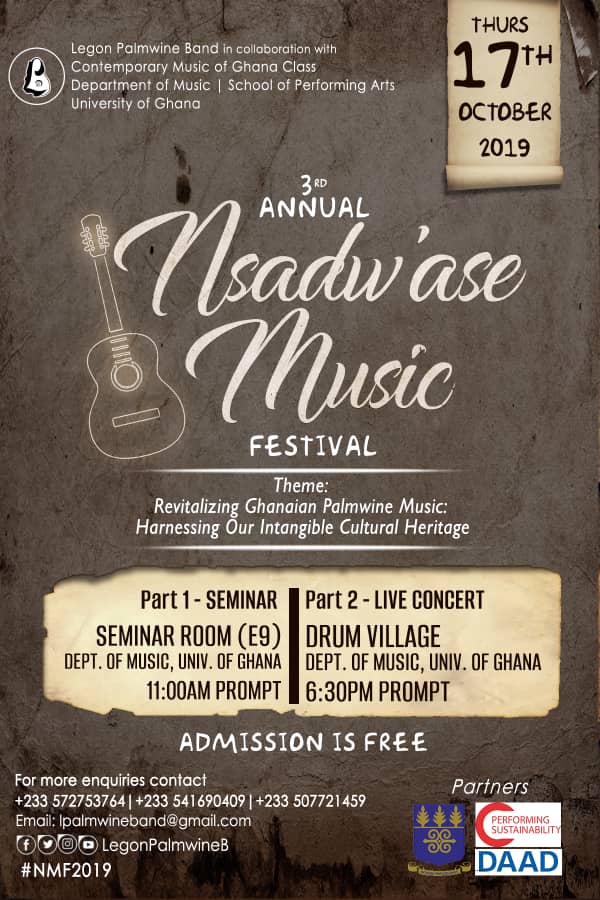 The annual Nsadw’ase Music Festival which celebrates the palm wine music is set to come off on Thursday, October 17, 2019.

Hosted by the Legon Palmwine Band, it is being organised under the theme “Revitalizing Ghanaian Palmwine Music: Harnessing our Intangible Cultural Heritage.”

The festival, which is under the auspices of the Nsadw’ase Nk?mm? Performance Circle, has since 2017 served as a platform for informal palm wine music-making and discussions.

Since its inception, the festival has served as a platform for model bands such as the Legon Palmwine and Kwan Pa Bands, as well as other young and enterprising musicians to showcase their talents as a result, serving as a dynamic platform for the revitalisation and promotion of this unique Ghanaian music tradition.

“In celebrating the third anniversary of its inception and growing status of the festival, it has become vital for the organizers to introduce a seminar where the essence and significance of the palmwine music tradition is discussed in addition to the live performances.”

The festival will be in two parts featuring a seminar and a live concert.

The theme for the seminar is “Revitalizing Ghanaian Palmwine Music: Harnessing our Intangible Cultural Heritage” and will last for about three hours.

The seminar will include presentations by eminent speakers who are vested in the music tradition as well as Ghanaian popular music to share their experiences and thoughts.

An important segment of the seminar is a “Talking Circles” session were discussants are expected to explore possible ways in which the palmwine music tradition can be harnessed within its contemporary essence.

The second part of the festival is the live concert which will take place in the evening.

The concert is programed to last for about four hours where musicians and poets will share the stage within a broader context of conversation.

Artistes performing at this year’s festival include the Legon Palmwine Band, the Kwan Pa Band, Osei Korankye, Ackah Blay amongst other budding artists and poets of the monthly performance circle. 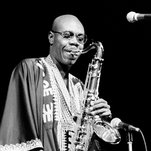