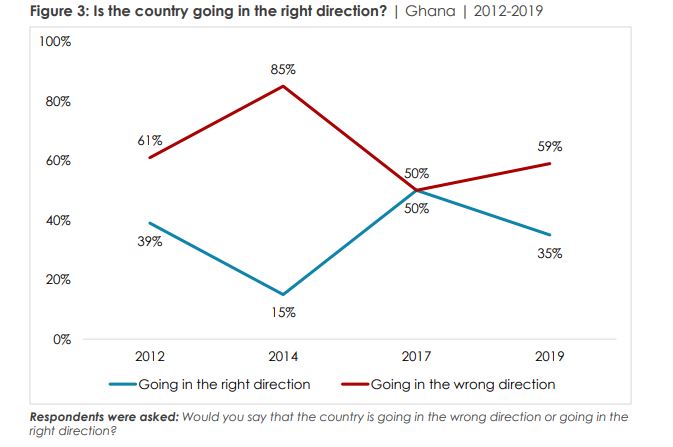 The government says it is encouraged by the new Afrobarometer report which says more Ghanaians believe that the country is “moving in the wrong direction” than two years ago.

Speaking on Eyewitness News, a Deputy Information Minister, Pius Hadzide said the report points “to the fact that the people do recognise and appreciate that this administration inherited a very challenging economy.”

He said the report is “a little indication that this is good work in progress and we take it as feedback… We have had to reverse the decline that the economy was facing when we took over and stabilised it.”

In 2017, 50 percent of Ghanaians felt Ghana was on the right track.

Approval ratings on indicators of the government’s economic performance in the latest survey declined sharply compared to 2017, with approval on the management of the economy recording the steepest drop, by 20 percentage points.

But there was some cause for optimism as the Afrobarometer report also noted that about 51 percent of Ghanaians were optimistic that things will get better in the next year.

Mr. Hadzide said the government will take the findings as a challenge to improve.

“Those areas that we have to pay particular attention to so that the aspirations of the people of Ghana can be met, this government will refocus and make renewed investments in those areas.”

Other key findings of the report

The Afrobarometer report noted that three in 10 Ghanaians (30 percent) described the country’s economic conditions as “fairly good” or “very good,” a modest decline from 35 percent recorded in 2017.

Only 31 percent say the country’s economic condition has improved over the past 12 months. But more than half (54 percent) are optimistic that things will be “better” or ”much better” in 12 months’ time.