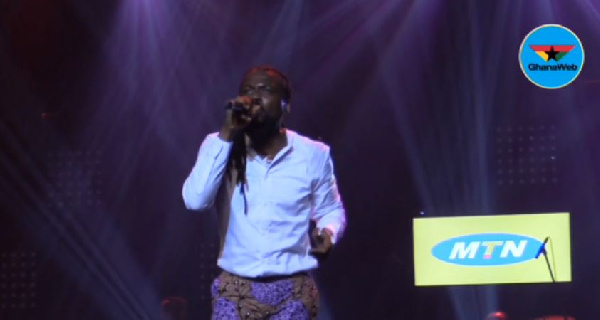 Ghana Web
Midway through his performance at the Farmers’ Day edition of MTN Music Festival, Samini doffed his hat to musicians he grew up listening to who were seated in the auditorium.

The reggae/dancehall musician recognising the contributions of the musicians – Prince Bright of Bukbak fame, T-Blaze, Kwaisey P, Exdoe - performed bits of their songs using the Reggae Fest Riddim amid cheers from patrons.

“Before I continue, I see some legends in the place. Big up yourselves. People we saw on TV before we started doing music,” said Samini.

Amazed by the gesture, the musicians, beaming with smiles, danced to the performance.

Prior to Samini’s performance, patrons swam in nostalgic feelings as some of the aforementioned performed a song each. Introduced on stage by Andy Dosty, the old folks left lasting impressions with their energetic performances as patrons craved for more.

Held at the Accra International Conference Centre, Friday, December 6, the MTN Music Festival celebrated and expressed the cultural heritage of the Ghanaian through music.

The MTN Music Festival is organized in partnership with Slip Entertainment and it’s held as a prelude to key national holidays including the Independence Day and May Day celebrations.

Watch how Samini did it

Coronavirus: The fears of a Kenyan domestic worker who can't stay at home