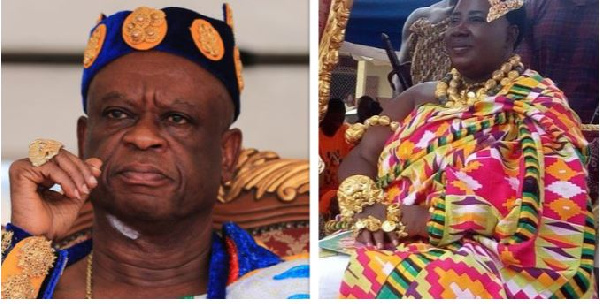 Briefing the media, Central Regional Police Public Relations Officer, Deputy Superintendent of Police, Irene Oppong explained on the 23/12/2019 the Regional police command arrested and detained Nana Osagyefo Amanfo Edu VI and Nana Ama Amissah III the Paramount Chief and the Queen-mother of Mankesim Traditional Council respectively to assist in investigation leading to the death of late Samuel Ampofo, the BNI officer and one other.

She explained that the two suspects have volunteered statements to the police, and have been put before the saltpond District court presided over by Her worship Patience Ablorh.

She noted that the two have however been remanded into police custody to reappear on the 8th of January, 2020.

"The case is still under investigation," she added.

An outdooring of a queen mother, Nana Otua, turned bloody when the BNI officer, Samuel Ampofo and a civilian were shot dead by some unknown assailants during a procession.

Five persons were arrested at the weekend and another later, bringing the number of suspects to six.

“In all the police have nine suspects who are assisting us with investigations,” she said.

The ‘outdooring’ of Nana Araba Otua came after years of a chieftaincy dispute in the area. The Daily Graphic gathered that a court ruling last week allegedly struck out the gazette of Osagyefo Amanfo Edu and Nana Ama Amissah who had, for years, been recognized as the Paramount Chief and the Paramount Queen mother of Mankessim, respectively.

Nana Otua’s faction, which had laid claim to the stool for many years, consequently held the ‘outdooring’ ceremony, which began from the palace at Obuonmu in Mankessim to the five main family shrines.

Dozens of people, clad in white, with white bands, and in a jubilant mood, followed the queen mother, who was in a palanquin, during the procession.

But when the procession was barely a few meters from the palace, unknown assailants fired gunshots into the procession, hitting the deceased persons and the others.

The incident compelled the Mankessim Police to call for reinforcement from the Cape Coast Regional Police Command.

There was palpable tension in the town after the shooting, as people formed groups to discuss the incident, while vehicles full of policemen crisscrossed the town.

After about two hours of a hold-up, the processors gathered again and went through the streets of Mankessim and re-converged on the palace grounds, amidst jubilation.

Some of the spectators said the procession was the last ritual to confirm Nana Otua as the Queen mother, and that they were glad the process had finally gone through.

The Linguist, Omankyeame Kofi Hagan, in a brief remark, said Mankessim was now ready to move on, with its Queen mother ‘outdoored’.

Soon, he said, in consultation with the kingmakers, a new paramount chief would be named, enstooled and ‘outdoored’.

COVID-19: Another death confirmed as one more person recovers

2 Chiefs, 26 Others Arrested Over Chieftaincy Clashes At Yong